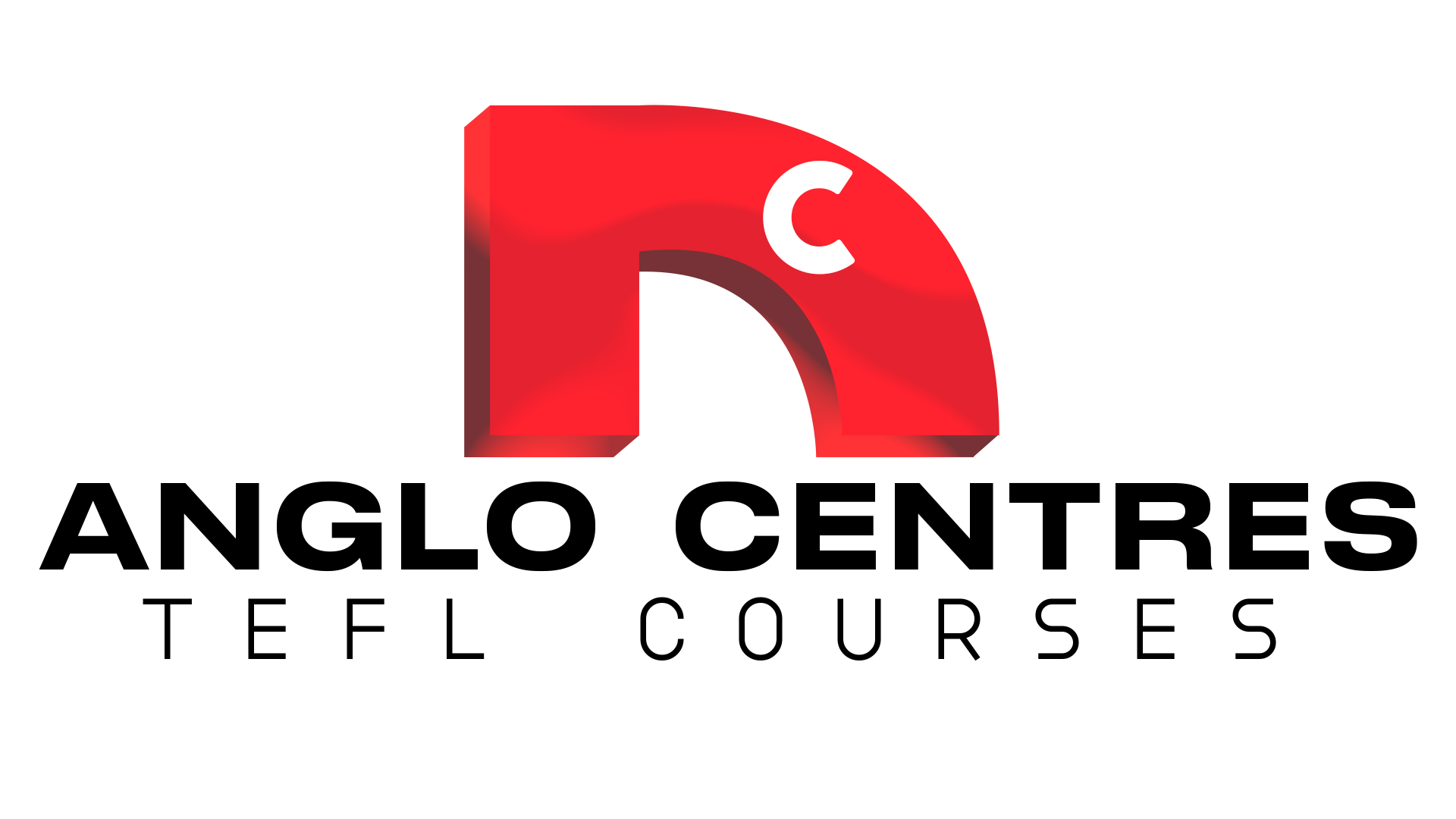 A Roman City by the Mediterranean Sea

Tarragona is located on the Mediterranean Spanish coast at less than 1-hour train ride from cosmopolitan Barcelona. The ancient city of Tarraco, as it was originally known, is now a UNESCO World Heritage Site and possesses everything an ideal tourist destination has to offer. From first-rate beaches and historical buildings, to breathtaking sceneries and architecture, there is a bit of everything for everyone including a vibrant nightlife, plenty of sunshine and excellent food!

While bigger cities such as Madrid or Barcelona seem overcrowded with English teachers, Tarragona still has loads to offer with more and more TEFL / TESOL graduates choosing it as their destination. A residential TEFL / TESOL course requires good doses of peace and quiet, which a city like Tarragona, unlike bigger cities, can offer along with the opportunity to have fun any day of the week at a much lower cost. Then, if you feel like big-city adventure you can escape to bustling Barcelona at any time! Here are things that people are saying about our great city:

A city with an ancient past

Tarragona and its beautiful beaches are exactly what you are searching for if you are yearning for golden sand, crystal clear waters and basking in the sun. But if you also wish to discover the revealing ancient vestiges standing testament to Spain’s glorious past, the diverse archaeological complexes and museums spread about the Tarragona province and its capital are perfect for you. Just walk around towns like the picturesque Reus or the hectic Salou and discover its important heritage, along with the lifestyle of its hospitable dwellers. Also nature lovers are welcome, since the chances offered by Tarragona’s natural parks and gardens are immense.

From the artistic point of view, there are not many places that have such a large number of monuments and tourist attractions concentrated in such a small area as Tarragona has. Iberian civilization remains are plentiful in the whole region, as well as multiple Roman vestiges, especially in Tarragona city, where you can follow the traces of Rome in the Catalonian region. The splendorous past of the city is enclosed in its several well preserved edifices. Its most notable landmarks and tourist attractions are the Roman Amphitheatre in Tarragona and the Cistercian monastery in Poblet, as well as many other places of interest within the capital city, just to mention some examples. Reus, hometown of the internationally famous architect Gaudí, is nowadays a centre for Modernism architecture, a kind of art also to be found in many wine cellars throughout the whole Tarragona province.

Sun and beaches all around

Throughout the summer season, the heat ranges from 25 to 30 Cº although the stable sea gust help uphold a fresh feeling. The winters are always serene. Other features of the Tarragona climate are the moderately low rainfall all through the year, and an amazingly large number of dazzling, sun-drenched days during whichever season of the year.

Running along the entire coastline of the province of Tarragona, along 211 kilometres (131 miles), from Cunit to as far as Les Cases d’Alcanar, is a chain of heavenly beaches and striking cliffs, along with beautiful pine-covered headlands. The beaches are the very reason why a great extent of the world has discovered this small part in Spain. The beaches are visited by millions of people from all over Europe every year. The sand is fine, the water is crystal clear and balmy, and the lifestyle is just what you will yearn for when on holiday escape. The beaches are also the favourite leisure area of the locals. During the summer months, the beaches are crammed with families and people of all ages, from morning until night.

A balcony to the Mediterranean

Tarragona, known as the Balcony of the Mediterranean, is owing to the Romans, arguably the most elegant city of the Iberian peninsula. Just like in Barcelona, Tarragona’s main promenades are called ‘Ramblas’, where you can see the beautiful modernist buildings. Tarragona also has a beautiful beach which you can admire from the clifftop ‘Balco del Mediterrani’. This balcony divides the city into the old and new part. Furthermore, there are interesting museums and the remains of Tarragona’s Jewish quarter is also worth seeing. The Romans called it Tarraco and the huge part of Hispania they conquered was called Tarraconensis. The Roman walls surrounding the Old Town were built on even older huge stones that had been placed there to fortify the hilltop town long before the Romans arrived.

Tarragona cuisine is a reflection of the city’s historic and cultural personality: as a Mediterranean port, it owes much of its richness to the sea.

The fishermen bring us fresh shellfish and bluefish with the official geographical indication “Peix Blau de Tarragona”. The fishermen’s district, known as “el Serrallo”, is one of the city’s most picturesque. There, visitors will have their pick of restaurants offering savoury dishes based on the day’s catch.

Tarragona’s most emblematic dish is the cassola de romesco, a casserole based on a rich regional tomato nut sauce. Indeed, every two years a contest is held during the Santa Tecla festivities to determine who makes the city’s best. There, visitors can also sample the city’s renowned seafood paella, as well as rice cooked in squid ink, grilled or fried fish, arrossejat (a rice and seafood blend simmered in fish stock), fideuejat (a seafood and noodle stew) and a wide assortment of creative and avant-garde recipes. Many of the city’s restaurants have exceptional seaside locations, affording diners a spectacular view of the port and allowing them to immerse themselves in a traditional fishermen’s setting.

City restaurants also draw on regional products brought from the local countryside, or Camp de Tarragona, including hazelnuts, almonds, olive oil and fresh vegetables, as well as meat and eggs. The nearby mountains add to this offer with wild mushrooms, potatoes and chestnuts, while the Delta de l’Ebre provides rice and citrus fruits. The select D.O. Tarragona wines also deserve special mention, in particular the mistelles and mellow wines, ideal with desserts.

In the High District, many restaurants are housed in historic buildings whose ancient Roman or medieval legacies can still be seen, transporting gourmands to an era of imperial splendour or the difficult years of the Spanish Reconquest. As an added flourish to this history-steeped setting, the month of May ushers in the “Tàrraco a Taula” food festival, where visitors can sample dishes made according to ancient Roman recipes.

Tarragona is also home to numerous tapas bars and llesqueries, the local version of a snack bar. With the arrival of the warm weather, city residents fill the tables set out in the plazas and streets to enjoy a traditional glass of vermouth. In winter, there is nothing better than organising a calçotada, or roasted spring onion party, with family and friends. 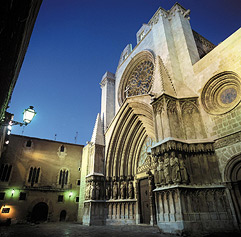 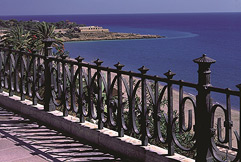 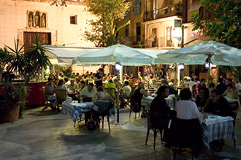 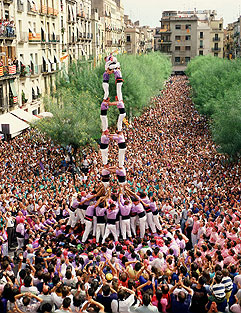 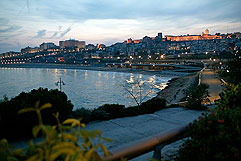 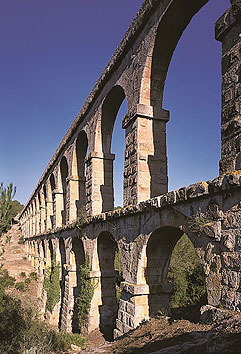